DIY would come to influence my work as a programmer, and educator in digital literacy. But first, such organizing required that we 1990s adherents of punk find information that proved hard to get. So when it was late enough for my parents to go to sleep, I took over the family phone line. On came that crunching, churning sound of bits connecting to what was then called “the information superhighway.”

In the 1980s, no band had symbolized the DIY ethos more than Minor Threat. These hardcore punks produced their own albums in pressed vinyl and tape. They distributed t-shirts and toured relentlessly, pasting photocopied flyers on walls without any help from major labels or promoters. An ethos developed that perpetuated local growth: DIY bands played only at small, all-age venues, where tickets were only available through local indie record stores or at the door.

I wanted in. I found some friends and formed a band named Dangerous Parallel, after the 38th parallel that divides North from South Korea. We’d sing about police harassment and wrongful imprisonment as someone passed out flyers lauding the benefits of vegetarianism (complete with statistics about the environmental devastation inherent in meat consumption). We started a chapter of Food Not Bombs in Bayshore, joining a network that spread to Melbourne, Montreal, London, and Prague. Our gatherings became de facto political discussion spaces: The stories of the many of veterans who came for food added a certain intensity and realism to our otherwise mostly untested concepts.

One could say I was always hacking things. I was brought up on Legos, showing from an early age the builder-socialist ethic of my Russian immigrant parents. So when I finally got a computer, I opened it up to see how it worked. I hacked together a connection to my stereo and TV. And I hacked parts of the operating system to make that first computer truly my own.

Still in my punk phase, I searched AskJeeves for music production programs. The software our band needed cost thousands of dollars, but instructions abounded on how to crack them for free. Navigating to the right sources—without being attacked by pornographers trying to steal personal information, or inject spyware—was an early form of digital literacy training. I wish more kids had that enterprising mentality now. As we start to get away from the DIY learning process, technology becomes more of a mysterious “black box.”

For me then, typing classes and Carmen Sandiego video games weren’t enlightening, or empowering. And for kids now, there are few teachers who teach computer technology, and also understand computers from the inside out. Fast forward to the present, where I now fight this trend by incorporating the DIY ethic into my work as President of Digital Democracy.

A recent training I gave in Iraq used our DIY model by introducing the Arabic version of “Let Me Google That For You.” This is a hilarious tool that creates a video of a simple Google search for any term that you enter. We explained how this can be sent as a response to clueless people who asked tech support those questions that can be answered by a simple search. I wanted to show Iraqi tech support people that they could do so much more by applying their technical skills. We disseminated some coding cheat sheets to better acquaint them with HTML & PHP, introduced http://W3schools.com for finding easy web tutorials that the Iraqi group could use to test themselves, and had them install an interactive Arabic-language crisis mapping website called Ushahidi.

When I travel around the world, training people and developing projects from Iraq to Haiti, I see latent makers. There are young people ready to build, but who do not think that they really can. It’s exciting to see my generation believe that they’re capable of almost anything—from tearing down a dictator, to building one of the world’s highest-valued companies by age 26.

When I travel around the world, training people and developing projects from Iraq to Haiti, I see latent makers. There are young people ready to build, but not thinking that they really can. It’s exciting to see my generation believe that they’re capable of almost anything – from tearing down a dictator, to building one of the world’s highest-valued companies by age 26. But beyond that optimism, we need to create tangible examples of how to make technology work for us in order to really make a lasting difference. That’s where I come in as a trainer and advocate.

In Haiti, DIY has even proven to save lives. Digital Democracy had a team on the ground in Port Au Prince when the devastating 2010 earthquake hit. Thankfully, neither they nor our partners were harmed, although our equipment was crushed in a collapsed building. One of our advisors put up the aforementioned platform, Ushahidi, to help themelves and others crowdsource messages of help and emergency. SMS, Tweets and Facebook posts were placed on a map by concerned students in Boston so that emergency responders could save lives in Haiti. Thankfully, our staff made it back safe, and we showed what volunteers and concerned citizens can accomplish in places like Haiti—where there was no “911” to call, and where public infrastructure had been absolutely destroyed.

We’ve been working in Haiti ever since, responding to the exponentially rising instances of rape by supporting local womens’ groups in creating a systematic way for them to stop gender-based violence in the country. For them, DIY has meant taking control of an outside narrative of their being victims. By blogging and taking photos and video testimonies, these women are creating their own new and brighter future.

Together, we’re building a database system where Haitian women can securely input information and start to compile cases. Women can then prosecute their government if they don’t work to stop the violence. Holding power to account with evidence makes sure that they take the right steps to preventing future attacks. These are the types of skills that form the base layer of civics needed to create tomorrow’s political leadership in the country, after rebuilding it properly today.

Making changes to computer code as a teenager made anything seem possible. Why not make changes to social codes as well? There are plenty of system bugs that needed fixing. There were systemic attempts: political rallies. And patches for different viruses: “culture jamming.” Hacking the world seemed like the best way to collaborate with others and figure out ways to fix it.

The technology sector has a way of using quantifiable data and free information to completely pull the rug out from under dishonest political figures. Just like in Haiti, it’s using data to promote accountability by showing truth. In this era, there’s an expectation of transparency. But achieving transparence first requires digital literacy, to be able to process the numbers. No longer can we sit idly by as politicians take control of the narrative of our generation. We must take part in the rise of the DIY mentality in the 21st century. Hopefully we will see nations of builders, literate, organized, and ready to take control and build better democracies. It’s more possible now than ever. 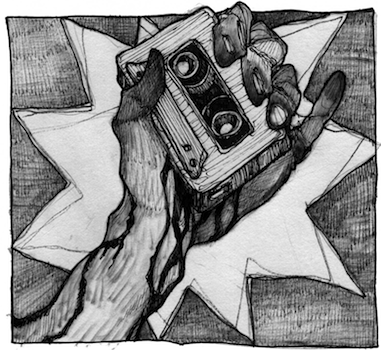