Who In The World Is My Representative?

What if there was a resource that aggregated every government official from around the world down to the district level? If we’re going to be serious about government transparency and digital democracy, this is sorely needed.

"In the digital era, it's easier to conflate participation with democracy. This is a dangerous and unfortunate trend as it degrades the very concept of what a democracy can and should be: a transparent, participatory, and accountable means of representative governance."

A Wired City Versus A Hurricane

My grandma was trapped in mandatory evacuation zone with hurricane Irene fast approaching. As an elderly Russian immigrant, she didn’t have much access to good information about the storm. I rushed to the internet to see what I can find so that I can give her the best advice I can.

Flash back to the earthquake in Haiti and I was part of an exciting example of how technology tools can be used in the face of a disaster. The non-profit I work for, Digital Democracy, had two staff in Port-Au-Prince when the earthquake struck. One of our advisors put up a crisismapping platform, Ushahidi, to help them and others crowdsource messages of help and emergency. SMS, Tweets and Facebook posts were placed on a map by concerned students in Boston so that emergency responders could save lives in Haiti. Thankfully our staff made it back safe, though they were shaken up and our equipment was crushed in their collapsed residence.

George Orwell wrote “History is written by the winners” and while this has been the case in many places, it has certainly not held true for Israel. After the war of independence established the state of Israel, it has continued to fight for legitimacy as a state.

Media has been central to framing this discussion. They have rightly outed human rights abuses as they’ve occurred, but often given heavy-handed and biased coverage that not only sours the debate, but encourages the promulgation of hate speech as the discussion norm. Most recently, this has been exemplified by an upcoming film by Benny Brunner, The Great Book Robbery.

I recently met Julian Assange. My conversation with him helped to shine a light on for Wikileaks’ internal processes, just as Raffi Khatchadourian’s brilliant piece in the New Yorker and Julian’s TED talk also helped to do.

My grandfather is the picture of a  90 year old soviet man. Injured by shrapnel from a grenade in the great patriotic war, yet he still jogs a few miles every morning. He lived through World War 2, the new economic policy, Stalin, the fall of the wall, and all the rest.

I had the chance to visit Riga, the city he lived in for all those years, along with my mom on her first trip back to Latvia since fleeing to the US as a refugee in the 70s. I would be able to understand my own roots, recounted to me through  the history and stories of family I have never known . Seeing through their eyes, I would also be able to experience the contrast between communist and European Latvia. But to contrast the staunch Reaganite-conservative politics that they share with so many others refugees like them in the US with those from a much different type of conservative in Europe, would be a real treat in seeing where the future might lead.

P2P doesn’t include the police

I’m on a train from the Hague to Amsterdam. Earlier today I described the place like going to Disney land, but for human rights, having never been before. The meetings went well and the city is beautiful, but it’s the train ride that got interesting. 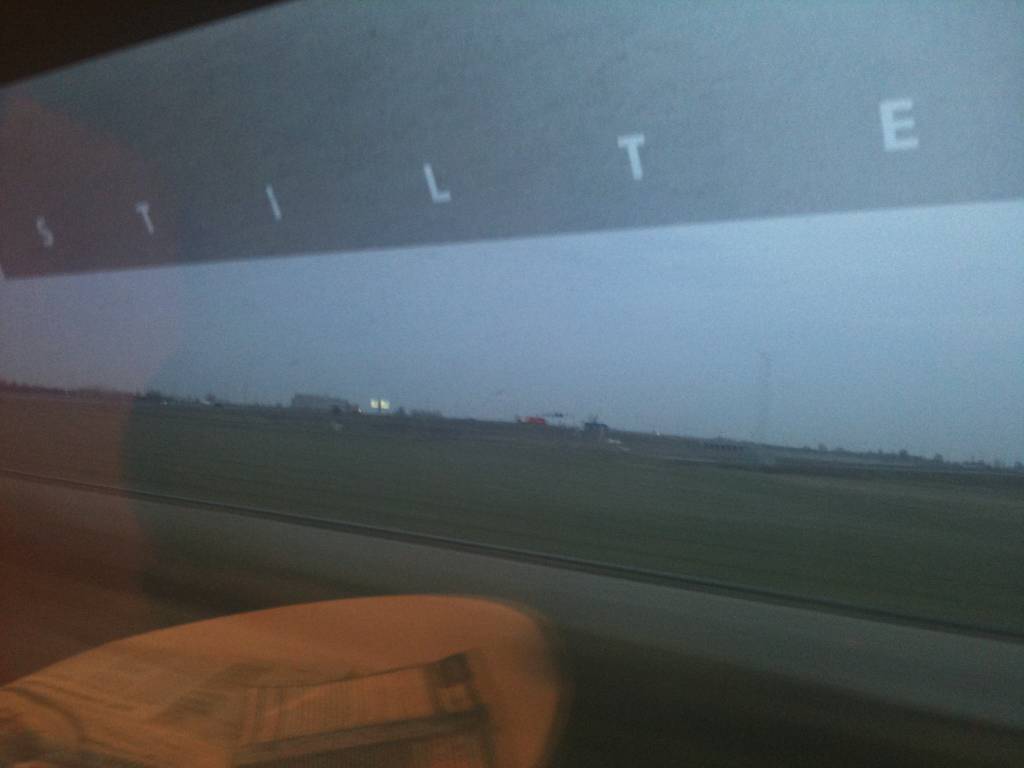 Stilte! Silent Car in the Hague

Being on the phone, I didn’t notice getting onto the quiet car. The Dutch “stilte” didn’t help clarify, but “silence” should have been good enough. In the middle of my conversation, a rather polite older blonde Dutch woman came over and explained that this was the quiet car. I immediately hung up (sorry Em) and noticed two boisterous young black men behind me. She promptly explained the same to them.
Their initial response was “who are you” to which she replied that “it is the rules.” they laughed, saying “who’s rules. Not ours.” it quickly got worse and she threatened to call the police, walking off. Initially in English, they switched to Dutch where all I could identify were dirty words & the name “wilders”, the conservative leader vying to be the next prime minister and often associated with fascism. Here, this is a sure way to stifle debate, as it is basically calling her a racist.
After a few more minutes of their cursing, a man intervened in English, calmly explaining that there are silent cars and non-silent ones and that they happened along the wrong one, which was their mistake. He noted that the woman had a point. Another laugh and curse and they were gone.
How effective are the police as a middle man in the situation. They quickly told her that the ride was an hour to Amsterdam, and they would not go peacefully. But the system itself has a logic that defaults in peer to peer communication. The decision to make the car silent was, in theory, collectively decided and very much collectively enjoyed. Police involvement? As NWA stated decades ago and, they reiterated, “fuck the police.”
What if the woman threatened to take a picture of them and upload it to a “citizen watch” type site. The man would never have had the time to intervene and neither would the cops. Would it have gotten hairy or would they have backed down? Is there a third way.
Certainly as tools continue to demcratoze it’s important to consider that in socieites with divides, those get echoed online, as danah boyd notes. How can societies learn to develop better behaviors in tandem with new tools that offer new options for civil society. Particularly bridging tech, language, culture and age divides.
December 19, 2009 · thoughts