Last week I got a chance to check out the ITP winter show 2009 and explore the state of innovation at the NYU’s program in a bit more detail. I was already familiar with some of the coolest projects from teaching at the Social Activism using Mobile Technology class. This semester seemed to be heavy on art & arduinos, which while interesting, wasn’t breaking down any walls as far as daily use around the world. Some projects really did hit me though:

Roundtable on Virtual Worlds and Nonprofits

I had the pleasure of representing Digital Democracy at the Global Kids’ Virtual World Capacity Building Program, a four-week intensive exposure to virtual worlds for public good institutions. At the end of the program, each of the participants gave presentations at the Global Kids-hosted Fall 09 Roundtable on Virtual Worlds and Nonprofits on MacArthur Island in Second Life (surl teleport link).  Representatives of five leading nonprofit organizations gave brief presentations on their initial explorations of Second Life and other virtual worlds, and how they are thinking of integrating these virtual tools into their organizations’ respective missions.

This project started as the brainchild of the Pioneers, a group of “innovative thinkers at the frontier of active citizenship.” Brought together by the great people at Humanity in Action and Felix Meritas, and supported by the Dutch government as part of the NY400, 20 Amsterdam and 20 New York City “P!oneers” set out to tackle the issues facing our societies.

Back in May I had the pleasure of exploring The Future, also known as NYU’s Interactive Telecommunications Program Spring Show 2009. Last night I had the pleasure of actually molding it by guest lecturing Nathan Freitas’ Social Activism using Mobile Technology class at ITP with my colleague Emily Jacobi.

"On Sept. 26, the protests were still going strong. It was 11 am, and Aung Aung Ye was juggling two computers and a mobile phone from his office in Thailand. That morning he was on his mobile talking with contacts in Burma’s commercial capital, Rangoon. At 1:34 am EST, he told me that more than 10,000 people had gathered near Traders Hotel in downtown Rangoon. By 1:40, the mood, still palpable electronically, changed. He had received frantic calls – the military had begun using tear gas and bullets against the peaceful demonstrators. His status message read, "Now, shooting in North/Oakalapa." Two minutes later, it changed again – “Don't brake my heart into a million pieces.”"

I’ve been doing research in Southeast Asia, which has kept me pretty busy and almost entirely off the internet. At the same time, I managed to launch an online television show through Blip.tv. Excitingly, it’s even been picked up by Witness on The Hub. Check it out and let me know your thoughts. They should be coming out every week.

Tech in the Classroom

I’ve been having a lot of fun lately exploring how technology is being brought into the classroom and how Digital Democracy can build on the tradition.

The initial Project Einstein in the refugee camps in Bangladesh was an incredible experience that I haven’t written much about here. Empowering marginalized youth with any sort of positive education is an incredible experience. Having the opportunity to work with them on the art of photography was absolutely extraordinary and I appreciate What Kids Can Do for opening me up to the experience. My colleague Emily and I created a model to have the kids build off one another by having them work in self-selected groups. From there, they chose topics and we worked with them to develop stories around these topics. What I hadn’t fully foreseen was their ability to adapt and produce so quickly. Despite operating in a foreign language and with new technology for the first time, they caught on quickly, figuring out hidden camera features by day 2.

What music have I been listening to the most for the past 3 months? What should I be listening to? I found a cool project today while looking into the extended functionality of last.fm to answer just that. 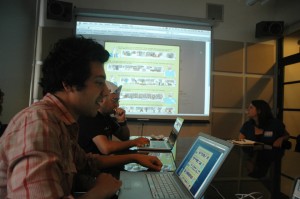 Tish Shute has a fantastic overview of Participation Camp. It was fantastic to be a part of it and brainstorm about the Open My City project and ideas with such a smart group of people at the cutting edge of government 2.0. Read all about it on her blog.