I’m always excited to go back to Armenia, my old stomping grounds. Not only did I get the chance to explore new bars with old friends, this time I was coming for Barcamp Yerevan. 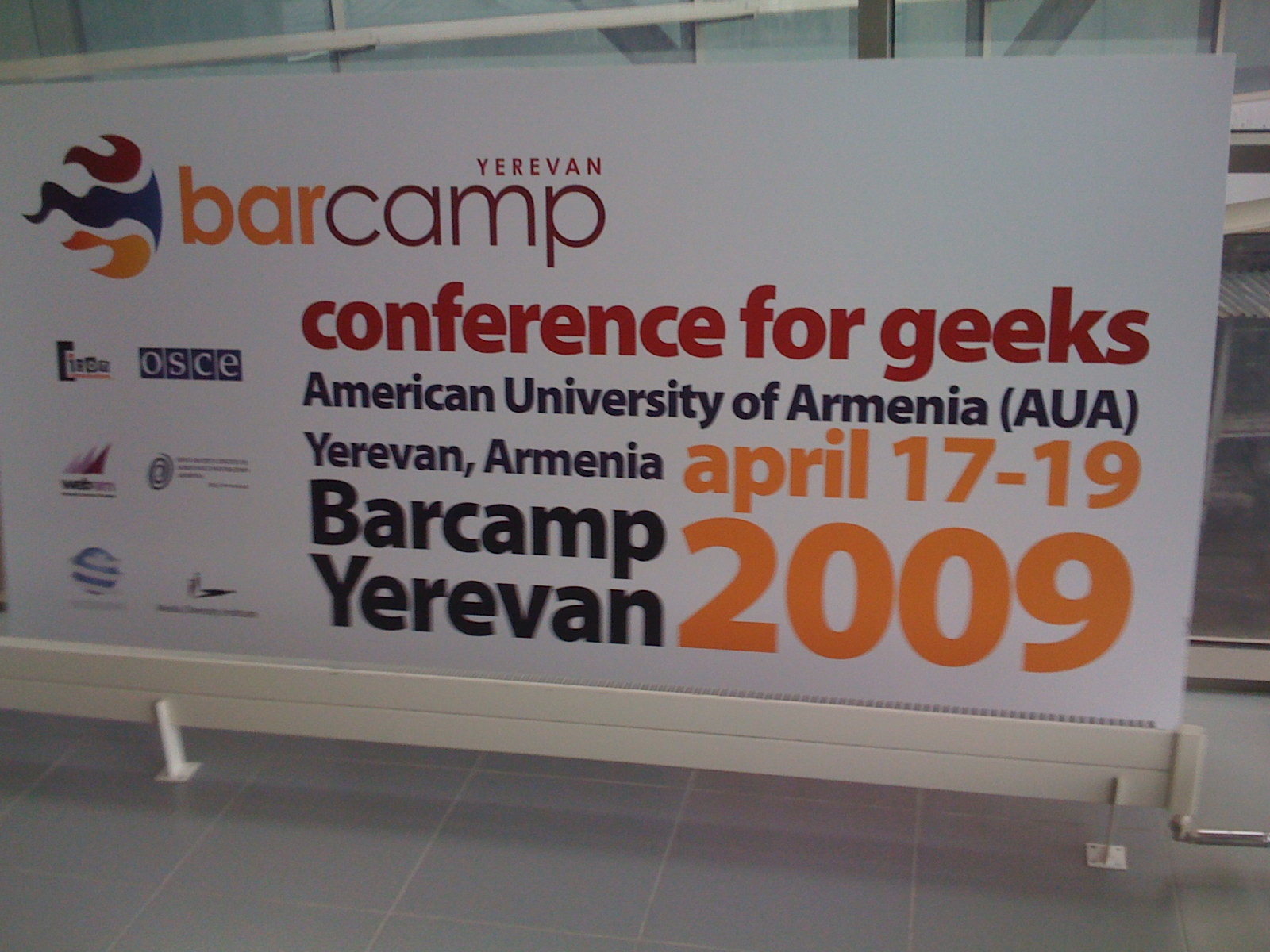 Many years back, I worked with a documentary film company, Bars Media, producing films and multimedia packages on a variety of subjects, including for Norwegian Refugee Council, for cultural preservation, and others. The company recently won best documentary film at the TriBeCa Film Festival for a great film about life on the front lines of the Karabagh war – People in War and Peace.  While there, I also founded Bem (which means platform in Armenian), a youth progressive action center that serves as a platform for Armenian youth to build an active civil society through art, media and free-expression. In essence, we were web 2.0 before that was a term, training youth in social media technologies back in 2003. Gathering news and creating an outlet for youth to speak out via the internet was a big part of our work. Initially we were using IndyMedia and finally being saved by WordPress, Blogger, Live Jornal and projects that are more user-friendly.

However, at that time it wasn’t the software that was the problem. Working in a post-Soviet country back then meant constant power shortages, a lack of reliable running water, no chance of getting receipts (not that funders need those or are wary of corruption), poor phone connections, minimal mobile phone coverage or market penetration, and really really slow internet. Many of these aspects are staples in developing countries, but in what had until recently been a cosmopolitan city, these setbacks were frustrating.

Fast forward to the present and power is relatively reliable, water is usually running, mobile phones are everywhere and the mobile/internet monopoly that had once existed has toppled with people now surfing on WiMax. Most amusing was the government’s brilliant scheme to get rid of tax corruption. Now, on the back of every receipt, consumers can find a unique 8-digit number, which corresponds to a new lottery sponsored by the government of Armenia and the State Revenue Service. A winning receipt could win up to 5 million AMD (about $16,000). The government has heavily advertising the scheme with the motto, “You win. The state wins.” It’s not only encouraging people to ask for receipts, it’s apparently improving sex lives as Armenian men have a wonderful way to hit on cute girls: enter a store, buy something, and then ignore the receipt.

Given the infrastructure improvements, I was excited to see the state of innovation at Barcamp Yerevan. I wasn’t disappointed. Almost before I had the chance to get to it, the white board for day 1 had been filled: 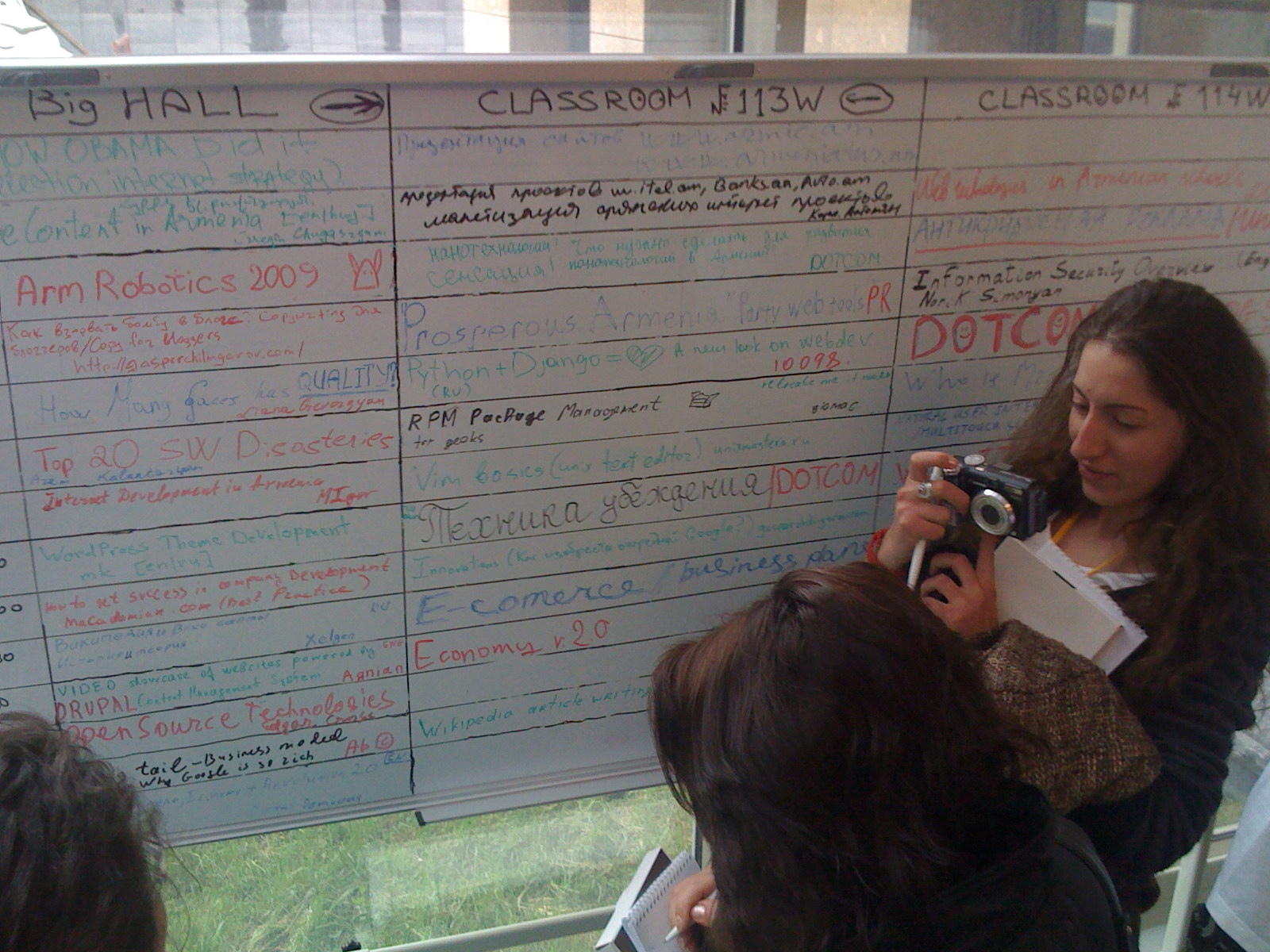 Much to my surprise, the event kicked off with a presentation entitled “How Obama Did It”. The surprise was that it was presented by a Ukranian by the name of Максим Саваневски [Maksym Savenevsky]. For the past 8 years in my travels abroad, I’d always had to defend America and Americans, explaining how we could have elected George W. Bush to the presidency and why we would have declared so many wars in such a short time. It wasn’t an easy position to defend nor to explain, but so it goes. This represented to me a sea change in perspective. The room was silent (something else I rarely see in Armenia). People hung on his every word. He even spoke in English, though I was the only native English speaker and, aside from the two Georgians there who refused to speak Russian (as Georgians tend to), most people were more comfortable with русский язык. His presentation was a compelling story of Obama’s new media strategy, replete with “Tell your Mama/ vote for Obama”, Obama Girl, and the Yes We Can music video. Good for business, good for politics, good for the world, right?

Given my role as the only American there, I thought it my place to explain the potential dangers that Obama’s victory means for the democratic process. My discussion, Government, Economy & Revolution 2.0, laid out the current state of social media and the impact in these different sectors. As far as Obama, I outlined how David Axelrod’s strategy closely mirrored the genius of Karl Rove – localize the pitch. Knowing the demographics of a country intimately can help inform what campaign promises to make in which particular place. Using web 2.0 tools, this process is much easier and therefore more dangerous. Given a politician’s ability to tell a constituency exactly what they want to hear, there has to be an accountability to those promises. Otherwise, they can say what is strategically in their interest to get elected and do anything they desire once in office. To explain this I spoke about the need for government accountability and open government tools such as the Drupal recovery.gov and data.gov and on the citizen accountability side, initiatives out of the Sunlight Foundation, such as Open Secrets. I continued to economics, explaining my perspective that the current “economic crisis” will be reflected on more as the beginnings of the post-industrial revolution and the need for the geeks from the barcamp to rally for the benefit of Armenia. My conclusion summed up how technology has been used in recent “revolutions” and pointed out that it can be used to better society when truly understood and leveraged, and not used brashly.

A lot of response I received seemed to be confusion about how a Ukrainian could praise Obama while an American gives warning about him. I thought it necessary to explain further and held a session the next day called “Civil Society Tech Brainstorm.” Here I detailed the benefits of government transparency and the power of knowing how political action committees are spending their money. With Open Secrets, we looked at Armenian American PAC to see how American-Armenians were lobbying the US government on their behalf. People were shocked but encouraged. The short brainstorm after (session were 30 minutes long), reflected on how technology had already been used in civil society campaigns with Green Light and Save Teghut Forest (both Bem related!). For future actions, we discussed the difference between campaigning and engagement, pointing out that as of yet, there’s been a lack of individual empowerment in campaigns. It seems that Obama might have his impact abroad in more ways than just direct diplomacy. 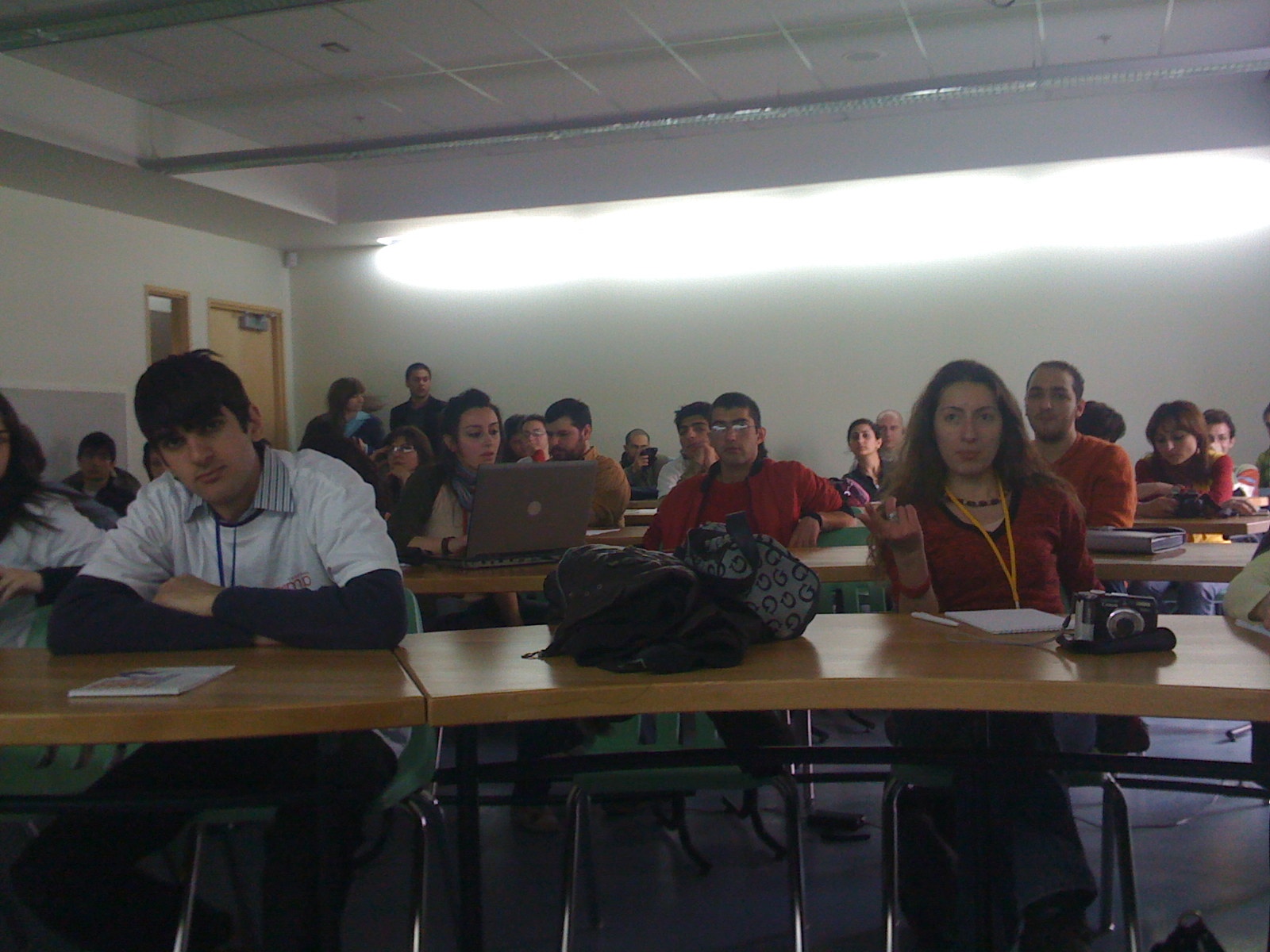 A lot of the rest of the sessions were focused on teaching, rather than exchanging, as in most barcamps. To me, this really showed the power of bringing all these people under one roof. Before moving forward on collaboration, people need to know what one another are working on, and apparently this hasn’t happened enough yet. Now that it has, I see a lot of opportunity to not only teach one another about what one excels in, but rather to start building. Topics that were being presented ranged from MK on QR codes, Drupal, the long tail, Armenian wikipedia, Android, robots and WordPress. This last example drew two translators together that didn’t know that they were both translating the CMS. Ah, the love story of what can happen at a barcamp.

One of my favorite projects unfortunately didn’t even get a chance to be aired out in the open. My friend Xelgen made a map of free wifi spots throughout Yerevan. I was really excited for him to present it because I still can’t believe that any actually exist. Being able to work in an internet cafe with a cappuccino revolutionized the rest of my stay in the country.

One of my favorites that was actually presented was by the group DOTCOM, a project bringing together 90 American, Armenian and Azerbaijani teenagers aged 14-16, participants using online tools such as blogs to “create socially conscious media that will impact communities across the U.S. and the Caucasus.” I spoke with a while to their Armenian Program Manager Astghik Zakaryan after the youth presented on their work. I’m extremely impressed with their approach and am encouraged to see youth working with social media to transcend boundaries that were put up given the politics of the region. With few Armenians going to Azerbaijan and vice-versa, the ability for misunderstandings is huge. Having run my own media projects attempting to connect people in the region, I know first hand how difficult it can be and wish them the best.

I was also fascinated to hear Movses Hakobyan from Internews talk about the complications of having creative commons licensing in Armenia and the campaign he’s building to push it ahead. Even though the Armenian President progressively opened his website to a public domain license, this has little meaning because of the structure of the country’s laws. For instance, any copyrighted material must be compensated. Their approach to correcting this is by pointing out contradictions in the nation’s constitution. Not an easy method, but potentially the only one available. I’ll be watching to see the success and difficulties of moving forward with it. After all, it’s easier to innovate when the law is on your side.

Thanks to all the organizers – Gegham, Artur, Samvel, Mikayel, Lusine, Marish, Aleksey, Shushan!