“The Internet perceives censorship as damage and routes around it”- John Gilmore.

The second half of the day started with a more intimate discussion hosted by Wendy M. Grossman titled Censorship: Can the Internet Still Route Around the Damage? The room was packed to hear an exciting panel of experts ranging from lawyers, researchers and Google talk about the meat of what’s happening on the ground around the world. This was easily my favorite session of the conference.

Ian Brown, a Senior Research Fellow at the Oxford Internet Institute started off the conversation by going deep, as in deep packet  inspection, a more advanced method of tracking data. He begins by explaining clean feed methods where traffic via an ISP basically runs through a proxy that “cleans” content based on a secret list of what is “bad.” It’s often argued that it will be used to stop child pornography, as censorship in the west often argues, but with little to no ability to check the truth of those claims. USer profiling by companies is another method, simply categorizing users according to what they’re browsing. The success here has been that companies have avoided profiling users browsing medial sites and other hot-button issues to expand their reach while remaining under the radar. Copy sense is becoming more well known example here in the US, the process of monitoring P2P file sharing traffic to search for fingerprints of copyrighted works. Violators are then prosecuted. Interception modernization program is taking what has traditionally been done to track communication and updating those techniques for the 21st century. Real-time wiretaps  profile communications traffic as it filters through. As for successful circumvention techniques, the good news is that the traditional methods still work quite well. Encryped VPNs still provide an easy tunnel around these issues. There’s also the solution of going through small business ISPs that are less likely to be doing government filtering. The reasoning behind why they’re not is that they’re not targeted by the big bureaucracies because it’s easier for them to do so. The negative is that many small ISPs are actually just reselling the services of the big guys.

TJ McIntyre, Lecturer in Law at University College Dublin and Chairman of Digital Rights Ireland. He presented the Internet Watch Foundation, a private watchdog in the UK. What’s interesting here is that they’ve set up a corporate watchdog with absolutely no accountability. A list of “dangerous materials” is generated by private body only accountable by private funders. It’s then administered by ISPs, not directly accountable by anyone. Most fascinating is that it’s encouraged by bodies of the state, such as the police etc, but without any formal ties. The reasoning behind that is that if the ties were formal then it might have to become a public body and therefore subject to certain laws like Human Rights and others. Existing in this limbo state allows it to almost serve the role of paramilitaries in less democratic states.

Derek E. Bambauer, Assistant Professor of Law at Brooklyn Law School came out with a series of aggressive statements. The most astounding was that censorship in democratic states is not altogether the problem. He explains that if it exists within the axis of

Then even a democratic country should be open to the possibility of legal filtering. However, he explains how Australia has been the pilot case for this and so far hasn’t been doing so well. Without a first ammendment to protect freedom of speech they saw a race to censorship durin the last election to target values voters. Anti-porn was conflated with strong values, and the list of what would be banned grew and grew. Of course, once this was released on Wikileaks, it became a go-to resource of the worst things on the internet for anyone interested and able to route around the ccensors. 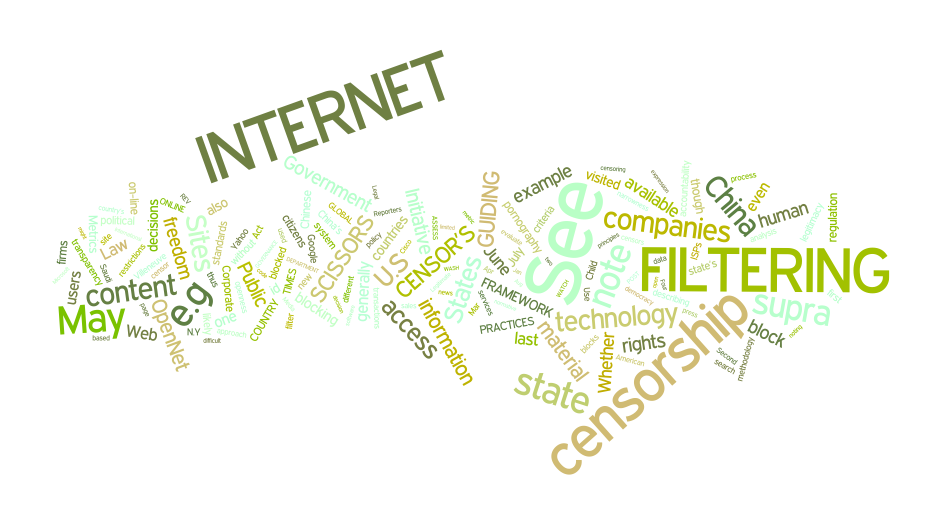 Catherine Crump, a staff attorney for the American Civil Liberties Union spoke in a much more grounded way about specific examples of illegal censorship that has taken place in the US and what they’ve done about it. She called it filtering 1.0, such as when libraries  simply restrict adult users from certain content. The ACLU recently sued 23 libraries in Washington state for refusing to unblock access to porn, firearms, and other content deemed unworthy by the institution. ACLU partnered with the 2nd Amendment Foundation, arguing that the libraries have violated federal and state laws. The perceived irony of the partnership was not overlooked by the left-leaning audience that got a kick out of it. She also described a case in Tennessee where they found that 130+ schools are involved in blocking LBGT sites. But anti-gay sites, such as ones that solve the problem of homosexuality through prayer were still open. Litigations against such blunt methods of biased censhorship will be unveiling over this summer.

Nicole Wong, legal officer for Google, was a great person to fill out the panel from the corporate side. She brings her expertise as a first amendment lawyer to a company in charge of both profit and handling huge amounts of the world’s information. As far as Google’s Youtube, she stressed that 16 hours of video are uploaded every minute. Now THAT’s responsibility. She explained her optimism about technologies opening closed regimes, explaining alternative tv and radio in Venezuela are now broadcast on Youtube and the Saffron revolution in Burma did the same (though in fact they didn’t at all). Their difficulty is their being censored in different countries: youtube blocked in 17+ countries, blogger in 7+ countries, orkut in 3+. What does she see as the biggest problem? Repressive regimes pointing to Australia, saying Western governments are doing the same but with different content. I hope she spoke with Craig Newmark given his comments the day before. On a question whether shareholder interest influence Google’s decisions at all, she was first taken aback, but her then vague answer was that it does insofar as shareholder interest necessitates useful products.

As the Q&A session broke out, there were some passionate points made. The first of which was that censorship in the US takes the form of battling copyright infringementm, but that the minimal understanding of this can be attributed to the fact that societies can develop tunnel vision that prevent theme from seeing certain aspects of their own societies. Rebecca Mckinnon jumped in at this point, to reiterate that in china smart families didnt realize that place was censored. As I mentioned in the last post, what can be done to lift that block was not discussed. Ms. Grossman made a strong point that UK libel laws might be the next big thing in censorship. English courts are willing to hear and rule on cases with no UK link. Nicole Wong’s point that repressive countries can adopt these Wesstern laws to force info removal was scary enough. Knowing that the UK has such a wide interpretation of jurisdiction on libel is even more frightening.

The next session on Cloud Computing, Privacy and Free Speech can best be summarized by my tweet:

Following the clouds were presentations on research. While they were all interesting in their own rights, the work done by Patrick Gage Kelley from CyLab Usable Privacy and Securiy (CUPS) at Carnegie Mellon University. His project titled “Designing a provacy label: assisting consumer undertading of online privacy practices” is trying to do exatly what it says, and harkens back to my the graphics from my first post at CFP. His perspective is that the privacy labels for each site need to be self generating based on the P3P already adopted by sites. Mine was more that they need to be picked up by the users. The beauty is that it seems as though one without the other doesn’t really work. Glad to see it and excited to follow the project as it evolves. This is a big step in bringing privacy to the internet and to a new generation.

Just for more cloud fun, I thought I’d put up a word cloud that I made given what I was hearing at the conference: 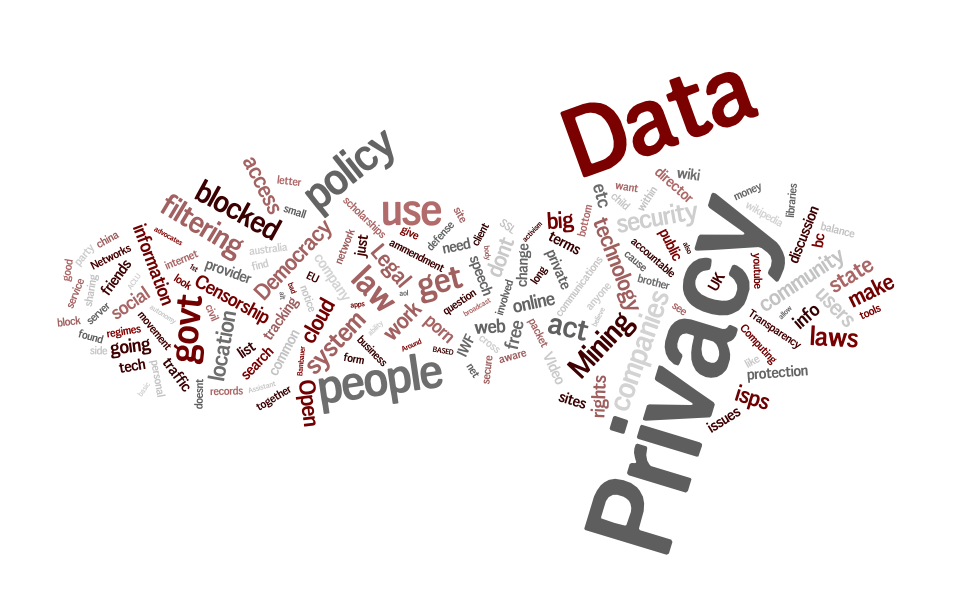