The outpouring of support in response to the devastating earthquake has been astounding, with over $58 million being raised by Hollywood alone through the “Hope for Haiti Now” telethon organized by George Clooney. The European Union’s 27 nations are contributing $575 million. U.S. charities have raised $470 million for disaster. The U.S. is providing the largest slice of a global response that totals more than $1 billion in government pledges. Even with the Haitian government allegedly getting only 1 cent of every US aid dollar, it’s still $100 million dollars. Haiti is one of the most corrupt countries in the world, consistently ranking in the top 10 along with the likes of Iran and Turkmenistan. Even some charities, such as Yele (formerly Wyclef Jean Foundation) on the ground have been accused of mishandling records.

What does this pot of gold of reconstruction money mean for what will actually happen on the ground? 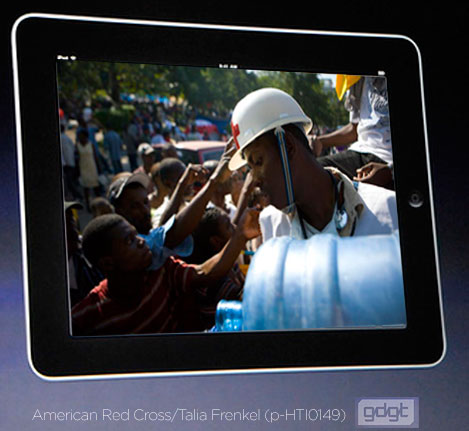 With the iPad trending, the focus away from Haiti relieves some social pressures to keep companies, organizations, & people focused & accountable to Haiti ground realities. Some argued that Michael Jackson ended the “Green Revolution” protests against election results in Iran. I shot a message out to Twitter wondering whether “the iPad will kill Haiti like Michael Jackson killed Iran” as a tongue in cheek response in many ways. The Iran protests have continued. Besides, Twitter was never much of a tool on the ground in Iran. It was great for bringing the story to an international public. Nevertheless, the shot was heard round the world and as more people paid attention, the pressure on the Iranian government grew as did support for the citizens of Iran. Even Chinese netizens chipped in, hitting the #1 trending topic with #Cn4Iran (thanks @mranti). But @dirktherabbit warns that

According to the Pew New Media Index… The blogosphere might indeed be prone to quickening the news cycle prone, shortening attention spans and causing us to zone out when it comes to hard news…preferring to move onto lighter topics.   Like sex really.

Will social media pressure continue to be applied from trending topics? Just because people are watching, doesn’t mean they are acting. There’s been a discussion about this issue on slacktivism, which I’ve generally avoided, on exactly that. The Haiti case became interesting to me because I watched first hand from the Ushahidi Situation Room in Boston how tags & RTs helped encourage open-source collaboration. Many groups from the ICRC to @nytimes & @CNN developed separate missing person systems to help contribute to the fforts. The problem is that these efforts reinvent the wheel, forcing concerned relatives to post pictures on as many disparate sites as they can in a desperate attempt to find loved ones. My reaching out to all these groups and encouraging that they become integrated and share information, it quickly happened. The same can be said for phone, credit card and money transfer companies who started offering their services for free as part of the relief effort, in response to accusations of “profiting from misery.” Groups that refused and continue to silo information notwithstanding (ie. facebook). With the iPad trend displacing Haiti as a major discussion point it relieves some social pressures that kept companies, organizations, & people focused & accountable to #Haiti ground realities

This has rise and fall of attention spans isn’t so simple. Haiti has been a teachable moment. I’ve seen the rise in sophisticated conversations around social tools in the public that I had not seen prior to this. New media literacy was on the rise. For example, the backlash against Yele not being a suitable group to donate to or the subdued donations to the Red Cross (ICRC) because of a notice on their website that says “Your contribution will be attributed to all our activities in Haiti, approximately half of the budget for which will be dedicated to the victims of the earthquake.” With so many people literally invested in the cause for Haiti, they’re also interested in not being duped and hopeful that the money they put in is actually being used to help people. It’s critical to follow and see whether those who put money in will continue to participate in the issues that Haiti will face long after it leaves the frontpage. It’s also a much different case than Iran where people were interested but not invested financially. Those who were socially invested of course have kept tabs on developments.

Will companies be too afraid to mess this up? Will there be enough pressure on either of these types of groups to minimize the amount of corruption that takes advantage of the influx of resources? People acted on  ICRC, asking for the details of why they might only transfer half of the money that is donated to it for this issue. To ICRC, it’s business as usual, yes, but transparency means that old models might need to change if they’re going to be the donors choice over more grassroots organizations like Partners in Health, who have operated in Haiti for a long time and have the trust and commitment of many in the affected communities.

Another problem is in supporting one local solution is funneling to a group at what expense. Where does funding come for others like Fonkoze and other grassroots initiatives, and to whom are they accountable  – local people, international groups, individual donors?

When CNN leaves Port Au Prince, what kind of 4th estate is left to provide the information necessary for informed decision making or social development. Community journalism can solve this issue. With infrastructure being put back in place, it’s going to be invaluable to connect grassroots voices to the newly established power structures. It’s not only a teachable moment for foreigners tuning into the headlines, but also for Haitian citizens to take control and have more say in the future of their country and eliminate barriers like pervasive corruption, inequality, and hopelessness.

In the days before the earthquake, Digital Democracy already saw a potential  for this kind of work, having partnered with a research team from The Fletcher School at Tufts University to work with local youth on “Project Einstein,” having them document the economics of their lives in Gros Morne. They divided into 4 teams, and we asked each team to come up with a theme about money. They chose:

While the pictures were lost in the collapse of the hotel in which they were staying, Project Einstein team member Chrissy Martin points out that:

Gros Morne, although unaffected, will not be able to deal with the influx of young people coming from Port au Prince in search of food, jobs, and houses. They already had a lack of industry, land, and sustainable agriculture

Integrating voices such as these on a national scale in a post disaster situation can be a powerful way of closing the feedback loop of information dissemination and make the process of helping people actually involve those people that much more, making it more democratic at its core. A map and photography based storytelling curriculum can transcend language barriers, define community assets and amplify local voices that might have otherwise remained marginalized. Building on the great work that InStedd, Ushahidi, Open Street Maps and other open systems now on the ground have set up in the crisis aftermath means working with tools that are flexible and can be linked into.

The system of response is starting to work better. Groups on the ground don’t have to waste as many resources looking for information, nor do they need to deploy as many people into the field when basic necessities like food and water are low. The sharing of data and the use of online volunteers bringing in personpower when it’s needed. With information more readily available, the question becomes how to get better information, from more sources, verify it and deliver it with a potential to be acted upon. Not easy questions, but better than what existed before.

I’m confident that in the aftermath of so much devastation, there can still be a rainbow leading people to the resources they deserve to rebuild their lives.