Dictators are often ruthless, charismatic and extremely intelligent. They also have the resources to be extremely sophisticated. If not showy.

In modern times, it’s hard for dictators to operate in the ways that they used to. Their citizens having mobile phone cameras and an audience of the world, its just not as easy to have an undocumented massacre as it was 10 years ago.

Suppressing a large demonstration has a political cost. Not in the sense of being ousted in elections, but certainly to the local businessmen who uphold the infrastructure of the regime, and to the foreign stakeholders who compete with these locals. Once an international body like the UN is called in through the human rights commission, one needs to begin asking for favors, and paying homage accordingly.

The internet plays an interesting role in this scenario. The few cases in which the internet and communications technologies were turned off in recent history, the world took notice. It’s hard to pretend “business as usual” when the tools that businesses use to operate are shuttered at the hand of a country and an Internet service provider happy to take direct orders. Global outcry ensues.

How about launching an attack on oneself instead of being subject to an embarrassingly public order that has already proven to backfire? Dictatorship through sleight of hand.

This may already be a reality. For the past several weeks, the Myanmar government has received a sustained number of DDoS attacks on the country’s mainframe, each one stronger than the last. The timing couldn’t be more interesting given that it is in the lead up to the first elections that the country has had in 20 years.

According to sources, the cost of these attacks has been significantly higher than their usual mArket rate. unfortunately the buyer is unknown. Over the coming weeks it will be interesting to watch whether the attacks remain and to see the extent of the damage. Early indications show that the usual amounts of information were still able to flow out of the country during the election.

Whether or Not these tricks or being pulled, the fact that they can be, means that in the internet world, petty thieves can harbor rogue states. How governments who are basing policies on the UDHR will react, remains to be seen. 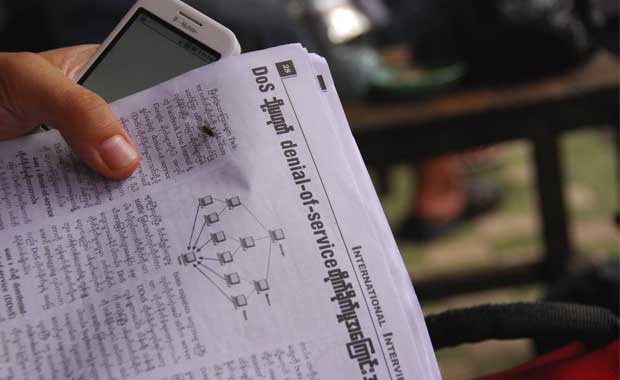