Back in May I had the pleasure of exploring The Future, also known as NYU’s Interactive Telecommunications Program Spring Show 2009. Last night I had the pleasure of actually molding it by guest lecturing Nathan Freitas’ Social Activism using Mobile Technology class at ITP with my colleague Emily Jacobi. 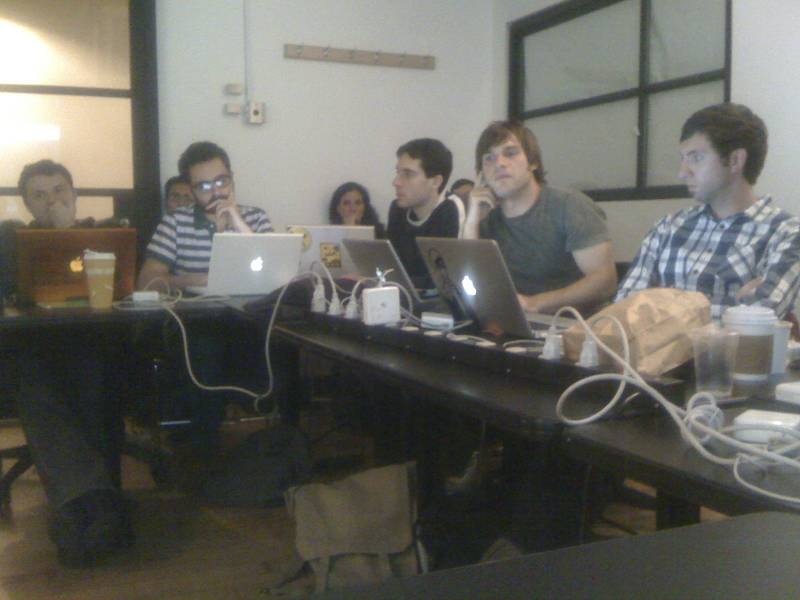 The topic of our class was “Grassroots Development – Techniques & Strategies,” discussing Digital Democracy‘s experiences doing fieldwork.  Before introducing the process by which we developed Handheld Human Rights and the story of developing it in the field, we wanted to have an understanding of how the students have begun to grow their own ideas. Having just completed their midterm assignments, we went around and had each group introduce themselves and their project, touching on these four points:

I’m curious to watch the projects as they grow develop and change. Here’s where they are so far (in no particular order):

My personal favorite was Hikomen (sp?) – a lifestreaming robot that people bring outside with them to introduce agoraphobic people to the outside world. It’s connected to either a person’s heart, creating a response mechanism for the person outside to literally feel the response of the agoraphobic person, but who sees the world via this robot. I see it as an arduino meets lifestreaming meets Tamagotchi versus agoraphobia. A lot of people have the disease and look to the few friends they have help. Similar to last year’s kokoro (that I obsessed over) in terms of the body response, I think understanding how humans are interacting with computers can make us more human is a powerful idea to explore in more depth. The biggest problem the creator identified was adoption, which I think is true and isn’t. For the agoraphobes, it could definitely be complicated to engage with and will be a fantastic exploration of successful UI for psychology. For those who want to help, I think it’ll be a lot of fun to figure out how to get users to adopt these things. Tamagotchi first came to my mind because of how popular those things were in my youth (absolutely dating myself here). Now imagine if there was a human being on the other side. And you were helping them?? I want one!

BK PK tackles the issue of finding a parking space by creating a gift economy around parking spots. Sort of a take a penny / leave a penny for parking spaces with your cell phone. Biggest problem identified? The government. Department of Transportation (DOT) won’t give up the data that belongs to citizens (despite Department of Information Technology and Telecommunications’ best efforts). The impact that they hope to achieve is stronger community, better access to local businesses, & a better Main Street. BUT WAIT! If the goal is community, why not utilize it as a resource? My recommendation was to through community parties get them involved and interested in gathering the data needed for the project themselves. Why bother with the government when people will be happy to crowdsource it themselves under the right circumstances? Key to project development: to thine own self be true. First step: check out stoop sales in Park Slope this weekend and talk to the young professionals with babies who are likely to have cars and ask them how to access their communities with this kind of tool.

ytbprty (YouTubeParty) is a project to circumvent censorship in Turkey. YouTube has been blocked for a while as I mentioned in an earlier post I had written from Istanbul. This project traverses two problems: government & marketing. The first by being smarter than their censors. The second by having a party to make the project go viral. The impact sought after is “making people feel like they’ve lost something” rather than what I initially thought would be making people feel like they’ve gained something. At the peak of the party, everything shuts off, making people more aware that they are being censored and that they now have a tool so that they don’t have to be. Citizens take charge.

One student abandoned his original project to create a suicide prevention game with the Trevor Project to focus instead on making an outrageous game that has user buy in. His stated barrier is that the issue is too serious for a test case. The actual problem is one that the non-profit sector often faces where serious development takes serious time and ample resources. This could potentially be a great time for partnership to harness the skills of some people who have been focused on gaming (MIT comes to mind), researchers concentrating on suicide prevention and practitioners at the organization and synthesize it into a mobile project. A difficult project indeed, but power in numbers.

One student is creating a flash-based game to prove inventory management skills. It involves stages of finding and sorting crabs to prove cognitive ability. The mobile port is an experiment to traverse the challenge that people are not accustomed to using phones while they are comfortable with computers.

NOAH (Networked Organisms and Habitats) – spot living organizsms, geotag them into an “ark” (database). Problem? How biodiverse is a neighborhood. Solution? Have people document it. Challenge? Product Appeal. Solution? Great product design for smart phones. Creative. Simple. Clear. Also has missions for connecting into sympathetic organizations. The backend sorting is probably going to be the trickiest part of this. Check them out as they crack that on GitHub.

Givkwik is proprietary & confidential so I won’t mention anything about it other than I find it interesting that there are still some people working on closed source projects for non-profits despite the trend in the other direction.

Reducing Long-Term Homelessness with Mobile Technology seeks to alleviate some of the issues that people who have become homeless face, namely their ability to get back on the grid. This allows just that by giving homeless people an actual phone number without having to supply a phone or a financial contract. It’s free and accessible at any public computer. Partnering with Google Voice, who provides the number, they’re test a small sample and see whether this is a tool that will be used by a population that is known for tech inaccessibility. Should be something to draw lessons from.

Some other projects include SMS No Smoke – a message-based system that helps people quit smoking by being supportive and providing reminders. earth255 is an on demand carpooling service. And i <3 pv campaign

One of the most interesting things to me when I’m acting as educator is to see how students are engaged with the technologies around them, not just how they talk about them. It was curious to note that at ITP it was nearly 100% Mac-based, aside from the Netbooks here and there. The phones were mostly either Androids or iPhones. The students were generally typing away the majority of the time (doubtlessly taking notes), until the end where I started to give more of the details about how Handheld Human Rights works and asking for feedback.

What I found most interesting was what forms students chose to send in their assignments. Surprisingly, as some of you may have noticed from this posting’s lack of links, most were not using social media sites to distribute their work. I found it to be a frustrating mess to keep track of all the students projects. While some at least have links to PDFs from their blogs, many still sent attachments. A lot communicate visually and there was certainly a general adherence to visual forms such as presentations and videos. None of these were on what I consider my go-tos (slideshare, YouTube, Vimeo). One was drop.io, an interesting new player in the mix. Even at this stage, education seems to be a place separated from the rest of the world and outside conversations. How could anyone find out what’s happening here? Thankfully there are a couple of people blogging about it.

During the ITP show last year, I went around speaking with students from the various classes doing amazing things with Asterisk, asking if they heard of the Freedom Fone project out of Zimbabwe, which expands the power of community radio through mobile phones. Unfortunately and surprisingly, no one had heard of it. As educational institutions change and shift in this digital era, it’s going to be crucial to close that communication gap. With the energy and intelligence in ITP, it’s important to connect these students to open source projects that are realities around the world and have them build upon, improve and innovate rather than reinvent the wheel or, worse yet, not learn from others mistakes. Be sure to stay tuned as I keep an eye on how things develop and with Nathan’s every day interactions with the students. 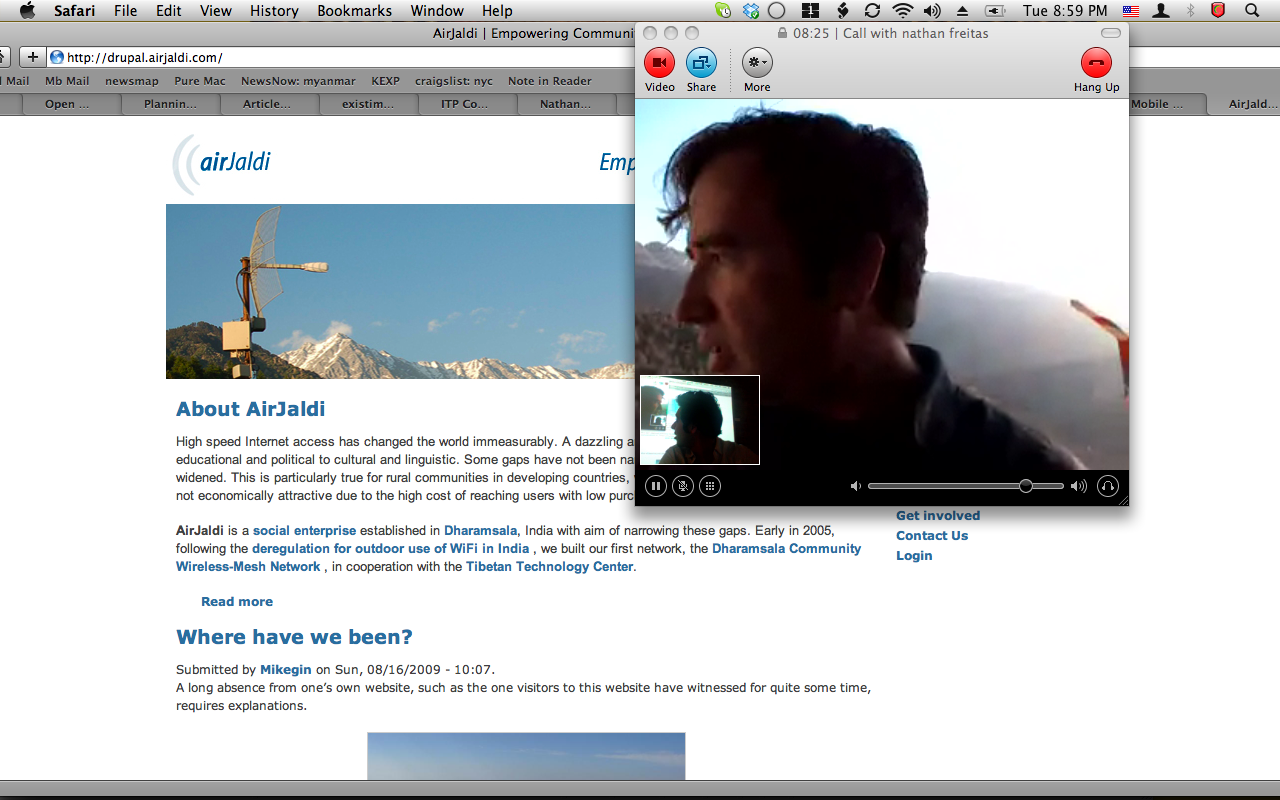 Nathan and I chat NYC to Dharamsala