Entering the 4th floor at Tisch means confronting unbridled creativity. The spring show at ITP is wall-to-wall projects for bizarre futures. A lot of them are fruits from strange imaginations, others are really fantastic insights into the way the world could potentially work. That doesn’t mean they’ll actually float. Before these things really get out into the real world, I wanted to cast my vote and see what sticks.

Here are a few of the projects that I was particularly blown away by (in no particular order): 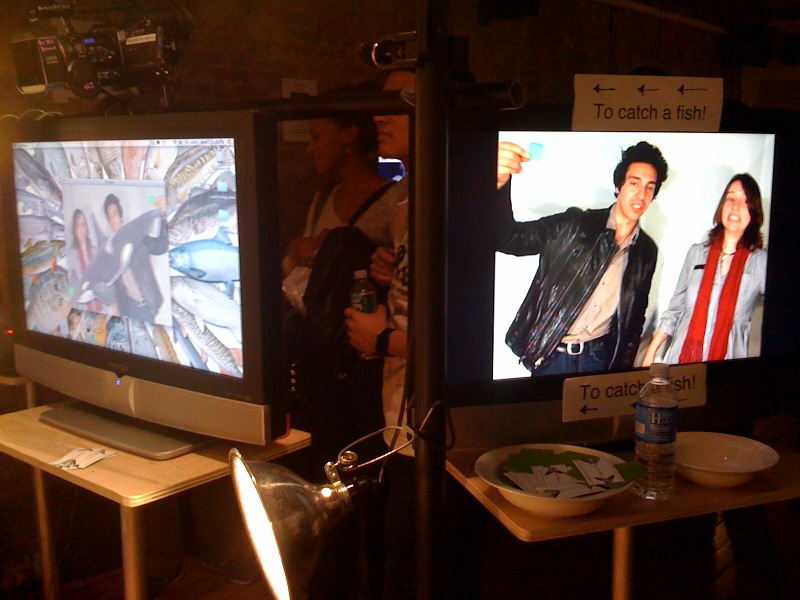 Emily and I testing A Fish This Big

But my all time favorites are still:

Overall, this is a great program and I’m excited to see what my colleague Nathan Freitas comes up with for it. Next year he’ll be teaching Social Activism Using Mobile Technology. He’s currently at the forefront of the field, having just won the Soul of the New Machine contest with his Guardian project. It’s a perfect time for the subject matter and I’m interested to see what the students come up with, as well as how D2 can help with more case studies and guest speakers. We’re already talking to him about implementing that project in the field to leverage our 3rd place win, Handheld Human Rights. Time will tell where the field is and where it will go from here.

P.S. I forgot to mention Freshback – a therapeutic technology for women to verbally record their frustrations into an inconspicuous recorder that then links to an anonymous online profile. While I don’t think it can be used for the purpose it was built for, I think that a secret voice recorder that is cheap and connects via bluetooth to a profile can be an interesting tool for organizations around the world.